Here is a piece I did for MacWorld Magazine about hour your family can use the Mac IOS all around the house. This was a fun piece to do because I got to use a few different textures from Kyle Webster’s brush sets. Get them HERE!
Also this was a good opportunity to use royalty free work for posters and the television. I got away with it because I just used some of my older illustrations. Recycled work. Comes in handy sometimes. 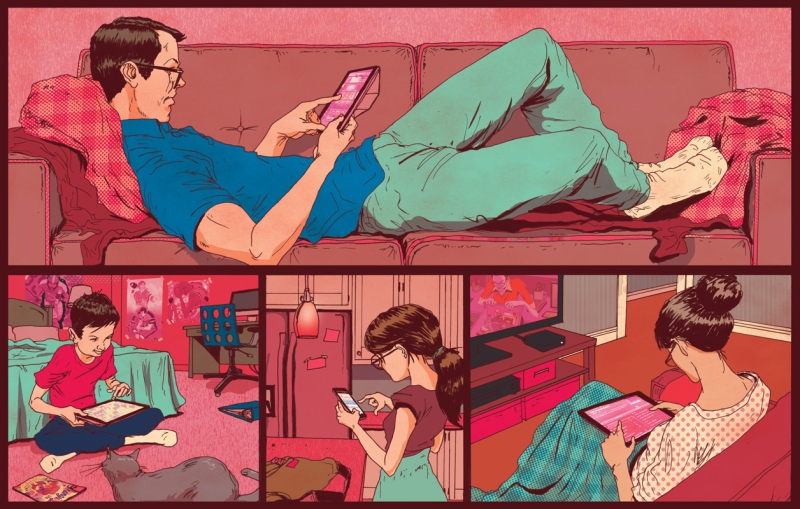 Here are a couple pieces I did for Hour Detroit magazine. The article is all about sun worshippers and how there are many woman and men that are taking the risks associated with too much tanning and baking away in the sun anyway. This was a fun one to do. Have a great weekend but be safe. 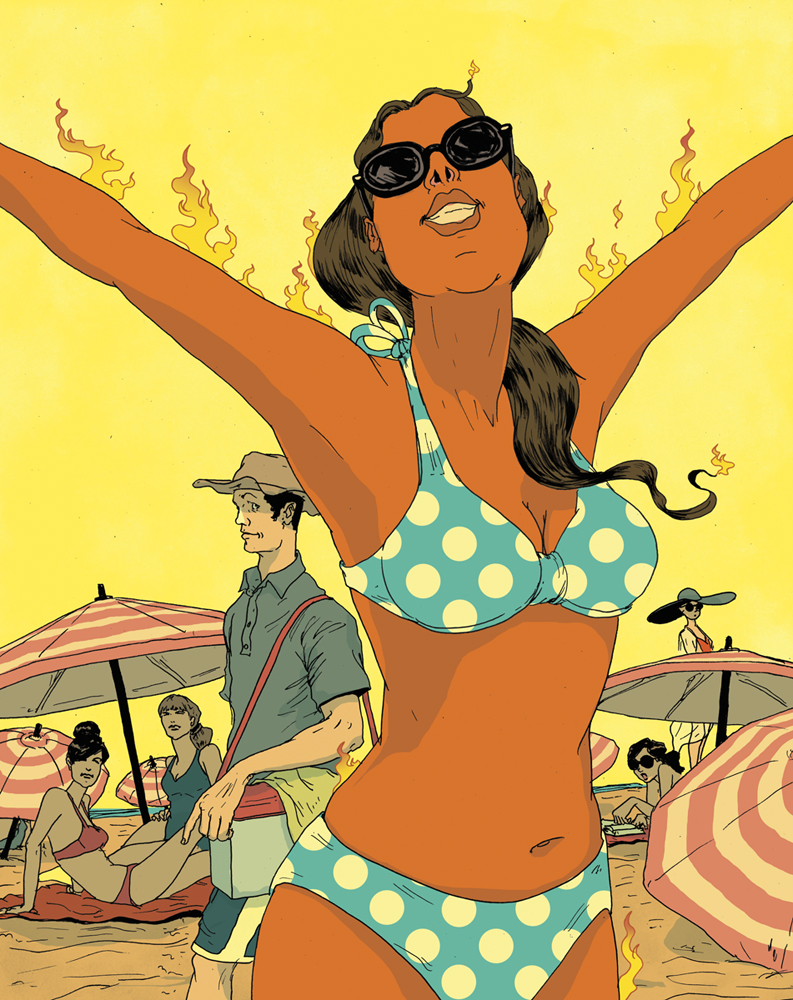 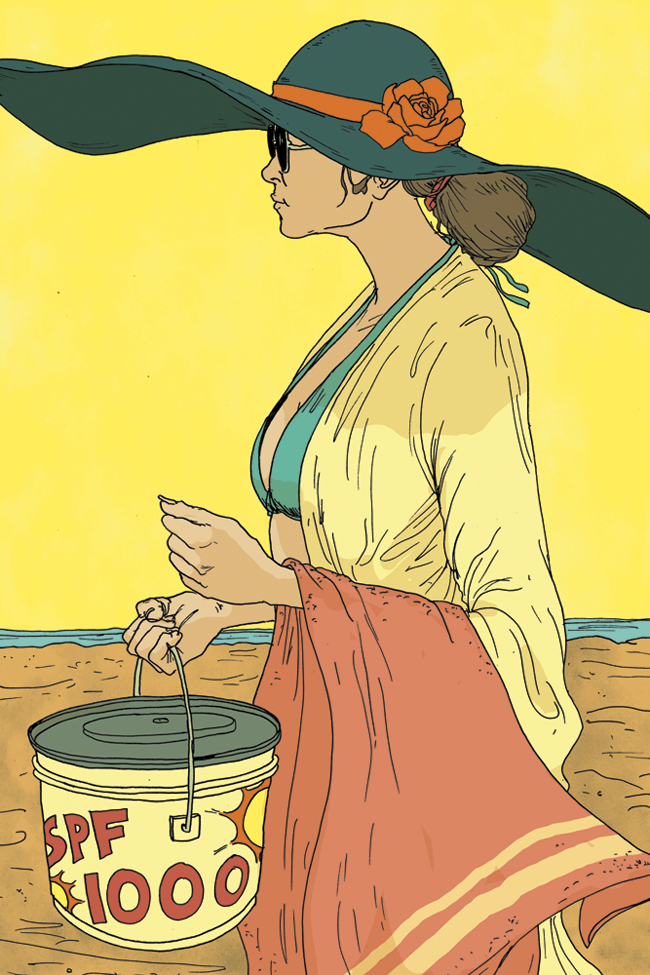 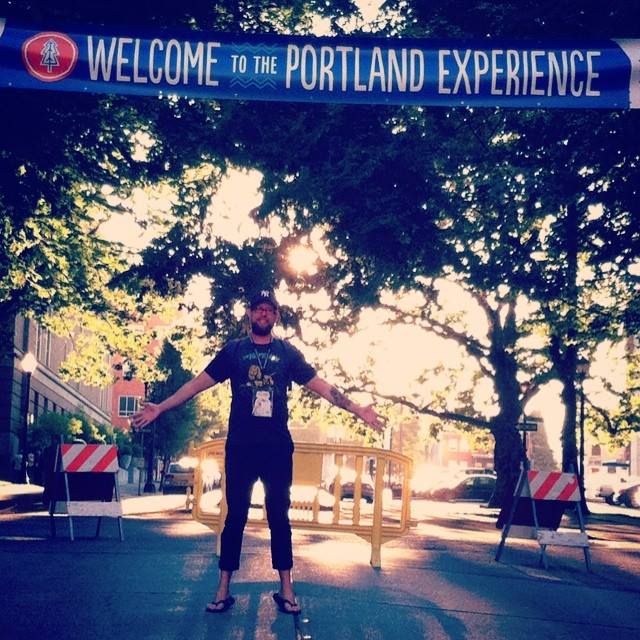 It’s been a week since my wife and I arrived home from out trip to Portland. ICON8 was the main reason for this trip. However we extended our time in Portland to make a little vacation out of the week. Whether you’ve been to Portland or not, it most definitely lives up to all the expectations that we had. 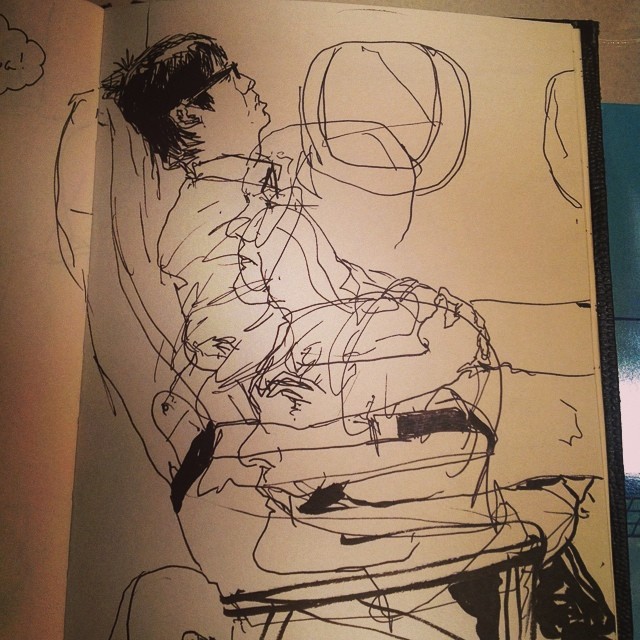 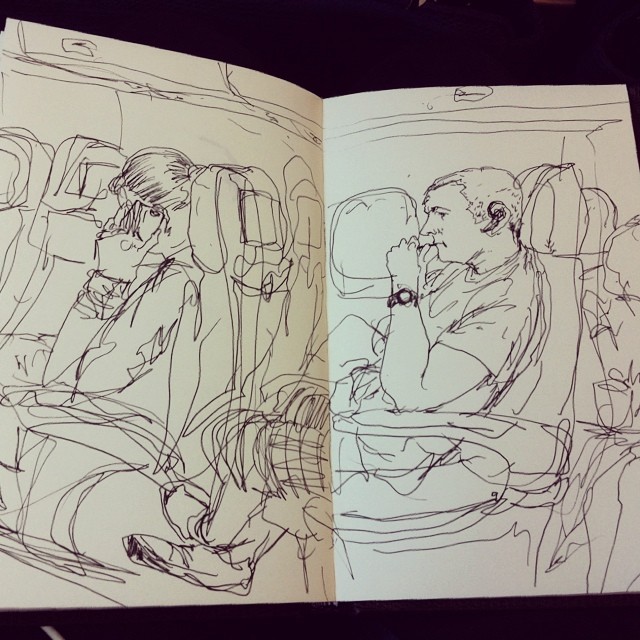 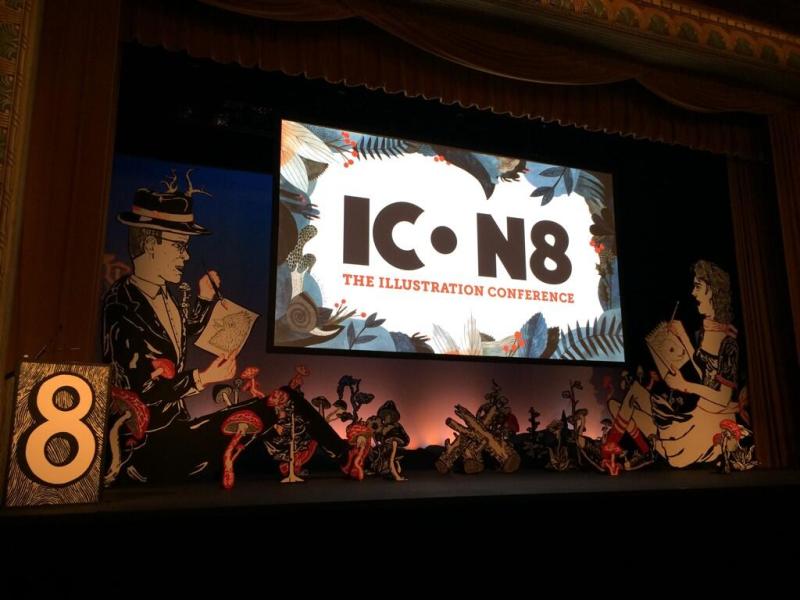 This illustration conference was my second ICON. The first one was ICON7 in Providence, Rhode Island. It only took one conference to solidify this weekend as a tradition I plan on doing every two years. I’m thoroughly looking forward to ICON9 wherever that may be.

The joy and excitement began as soon as we landed in Portland. I think one thing that impressed me the most was how unbelievably nice everyone in Portland was. This turned out to be a reflection of ICON8 and all those who attended. As with the previous conference in Providence, I met a slew of new people and got to spend quality time with many of the friends I made at ICON7.

The only workshop I registered for far exceeded my expectations. I shouldn’t have been surprised since it was an oil painting demo by the talented Robert Hunt. I learned so much. The demo went over time and only ended I think because there were other workshops that people had to go to. I could have sat there all day learning more and more. I envy the students that get to learn from Robert.

I’ve never really been to any other type of industry conference so I don’t have any reference point to compare ICON to others. I find the socializing part quite an interesting process. There are essentially three things that have to race through my mind when I first approach someone. I really can be awkward at first and quite unnatural. Maybe I’m doing it wrong. As I walk around I see someone that looks ‘important’ and I make eye contact but then I have to very quickly look down at their lanyard and try to get a glimpse of their name. If they’re an illustrator then I need to very quickly scan the thumbnails of portfolios in my head to figure out who this person is, do I know them, and what their work looks like. A great example of this is when I was introduced to the fantastic illustrator and as it turns out, hilarious man, Steve Simpson. I have followed him and his work for a few years now. However it took a few minutes to make the connection with his name to his work. This continued all weekend.  Maybe at future ICONs we’ll pay more but get lanyards that are like iPad minis and you have your name but you can immediately swipe to either side to show some of your work so people can more easily make the connections. Or I could just get better with names. After all I’m in an industry that requires that.

The opening ceremonies were exciting and very entertaining. Job well done. Did this opening out do ICON7? Close but not quite. The MC’s were funny. Some talks were great. Some were not. I have been hearing from many people that it felt like there was too much emphasis on “low brow” type of art and less on actual industry related topics. I guess the talks leaned too much on the ‘play’ part of the conference theme of Work+Play.

These are all things that the Board wants to hear so that as they work on planning for ICON9 they can tweak some of the things the people are criticizing. I don’t think you’ll be able to make everyone happy. To be honest the talks are only a small part of what attracts me to ICON. The social aspect and the conference is the biggest selling point for me. As many of the people in a creative field, we work as lone soldiers in our studios day and night only socializing with other creative people online. We relish any chance to get to see these individuals in person, in the flesh. If you ever get the chance to go to a Society of Illustrators party or and American Illustration party you know what I’m talking about. It’s a night of “oh I know your work.” Well ICON is four days of that. It’s a chance to not only meet your mentors, idols, heroes, but also be able to hang out with them.

I’ve been illustrating for just over 7 years now. Ever since I decided to pursue a career in the field of illustration I’ve been fascinated by the amount of camaraderie and support that we all give each other. ICON the conference not only reflects values like those but also encourages them. A great example is when the fab Julia Rothman went out of her way to pull me aside at the after party to introduce me to Christina Amini from Chronicle books. I feel like in any other industry other then Illustration, one would feel too threatened by competition to do something so nice. I’m sure you can ask any one of the many attendees, and they’ll tell you a similar story.

ICON7 was my first time at a conference of any sort. I was immediately hooked. I left ICON8 feeling the same as when I left Providence. I felt rejuvenated, inspired, excited, refreshed, and eager to work hard and continue to create, illustrate, and add value to not only my own industry but also the rest of the world.

I’ll list a few of the highlights and criticisms I had.

– Getting to the conference early to explore the beautiful city of Portland
– Having a dodgy looking guy walk by and without skipping a beat and looking over, as he passed said, “Hey what’s up scary white dude!” That made my day.
– People in Portland and at ICON are incredibly friendly. We Canadians aren’t the only friendly people.
– The talk Eleanor Davis gave at her book signing was quite inspiring. It gave me the inspiration to be able to make comics because that’s something I’d like to venture into. She encourages you to be yourself. Can’t wait to read her book I bought.
– Working with others can lead to amazing work.
– I’m a coffee snob and Portland actually had some great coffee, just not at the conference.
– ICON picks beautiful venues for their conferences
– The talks felt a little short at times. Some could have been a little longer.
– Andy J Miller’s talk was a great reminder of all the important rules I give myself as an illustrator. It’s nice sometimes to hear those things again.
– Scott Bakal is one of the nicest illustrators I know.
– It was so great to see and briefly hang out with all the fantastic people of Illustration Confidential. It was great to meet Noah Patrick Pfarr in person along with his hilarious and adorable daughters. Wish we all could have spent even more time together. IlloCon is a great group of people.
– Breakfast with Noah, kids, my wife, and my illustration BFF, Daniel Fishel was great
– Just being able to talk with Marshall Arisman is a treat.
– Being able to chat with Art Directors I’ve worked with and some I haven’t but would love to, in an environment that is very neutral. It makes approaching them to make an introduction less intimidating.
– Having a nice coffee hangout with Art Director, Lisa Kelsey.
– Having my ego stroked when people see my name and then say “Oh I love your work. I’ve been following you for a while now.” The best was meeting Stephanie Glaros in person for the first time and having her tell me that she regrets not ever working with me. That felt great.
– Meeting some of the many talented folks that I’ve posted on Illustration Age. It feels great to give back in some capacity. 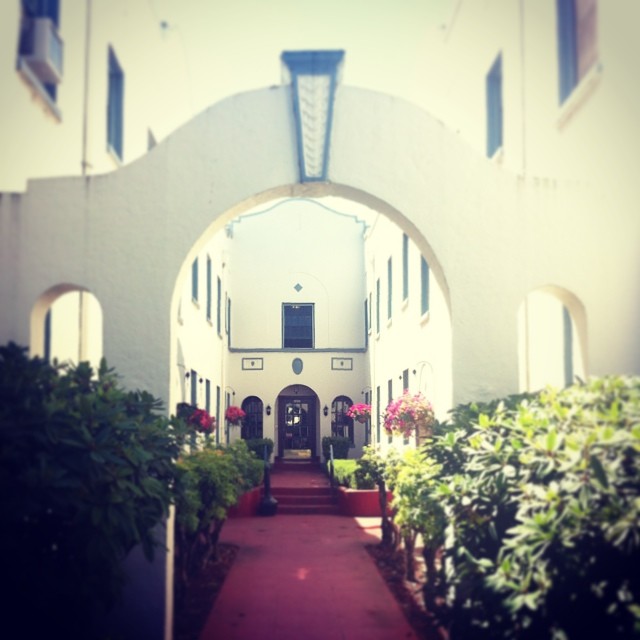 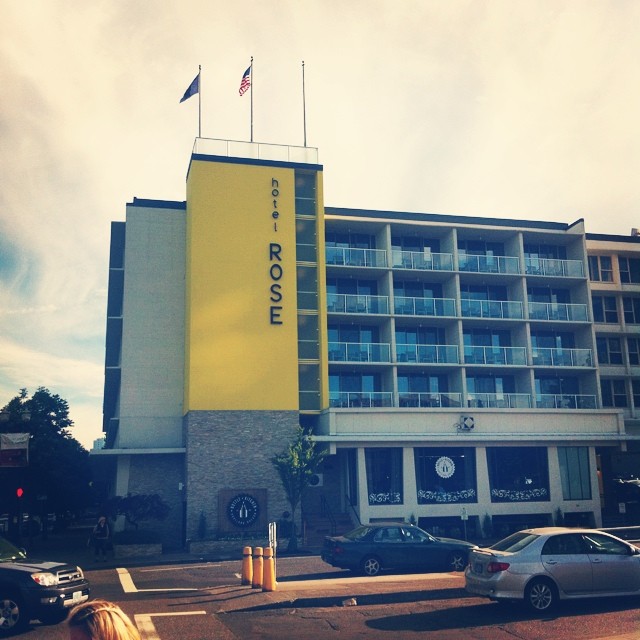 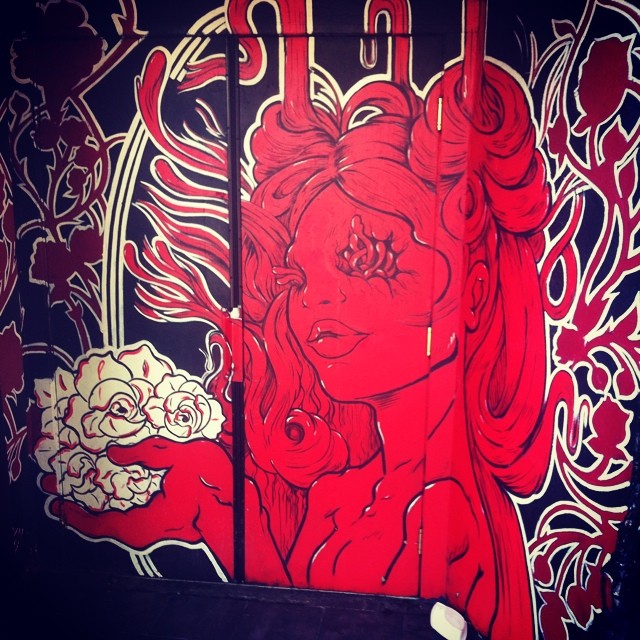 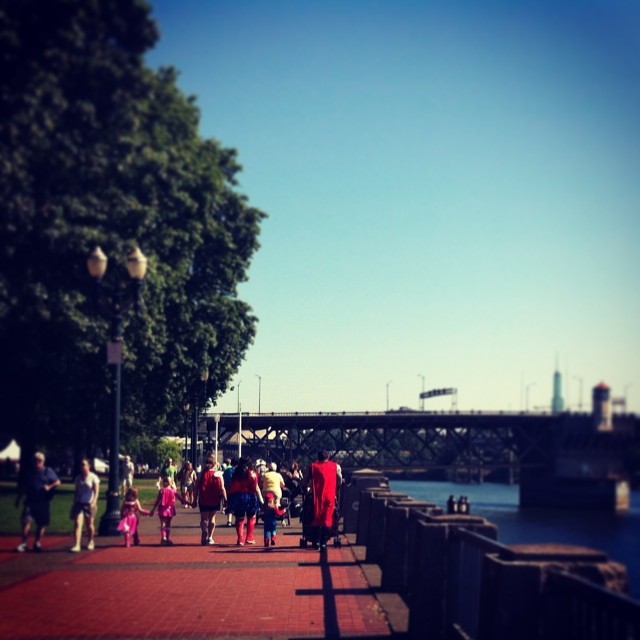 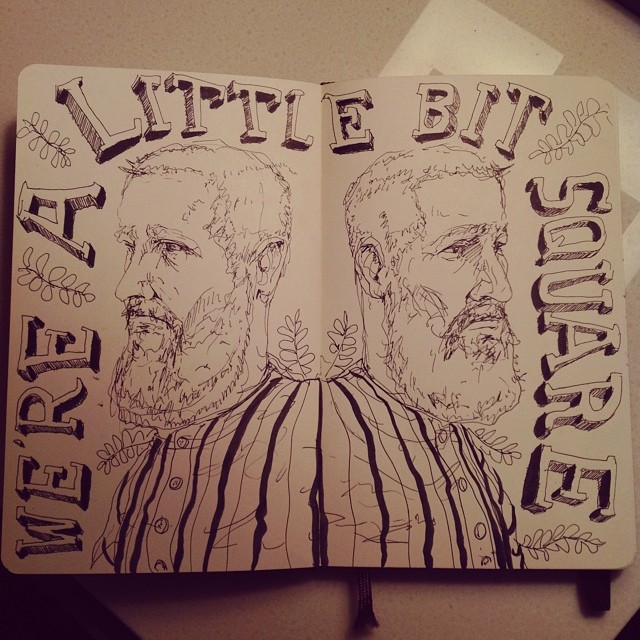 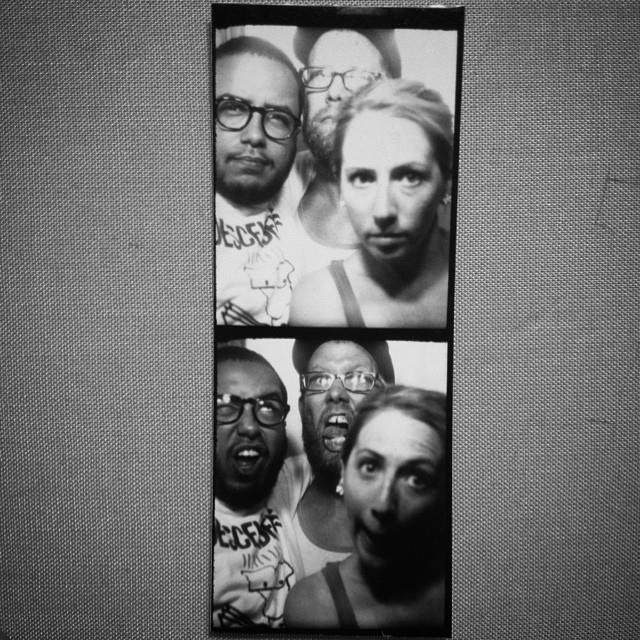 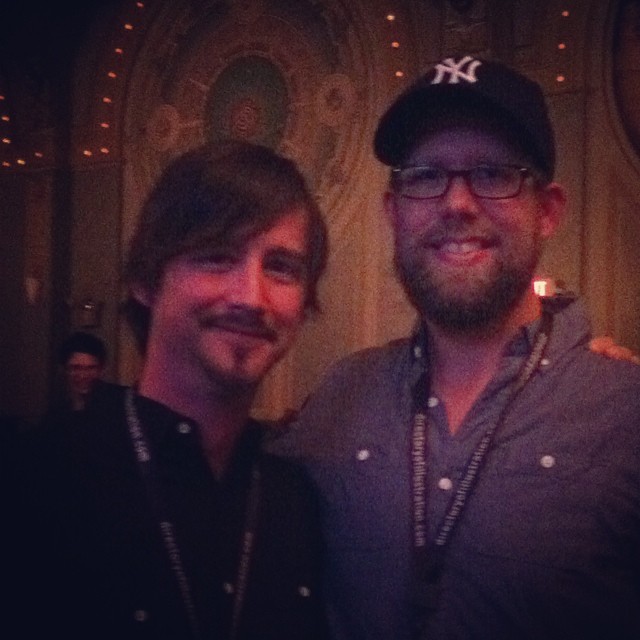 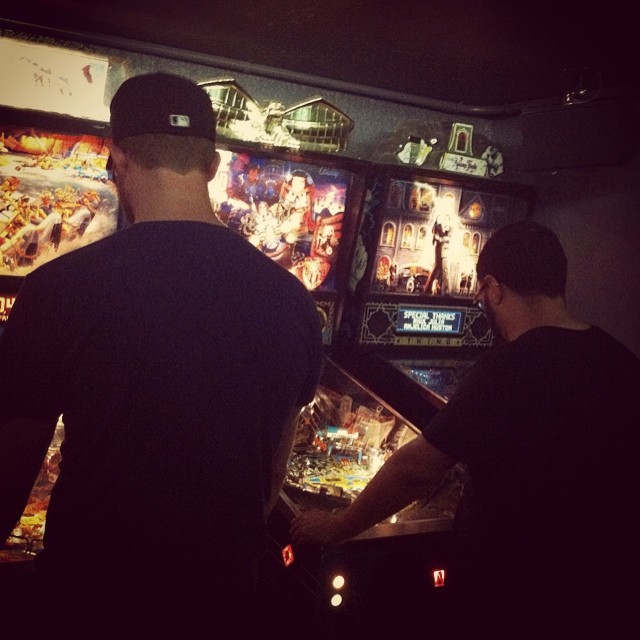 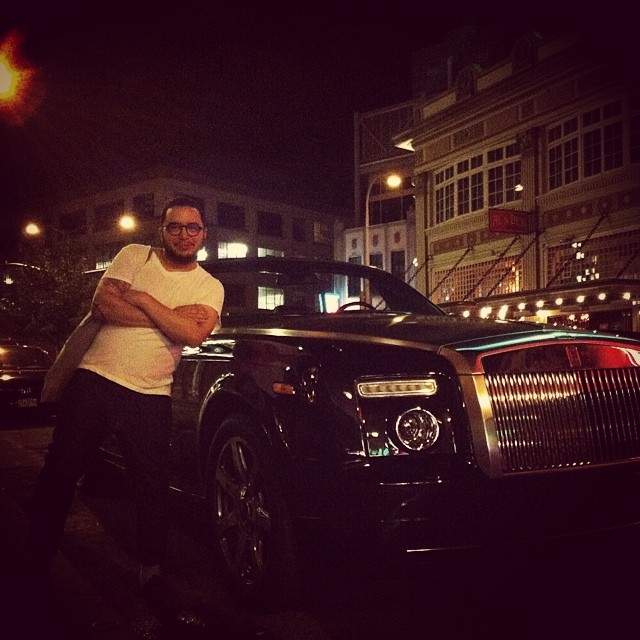 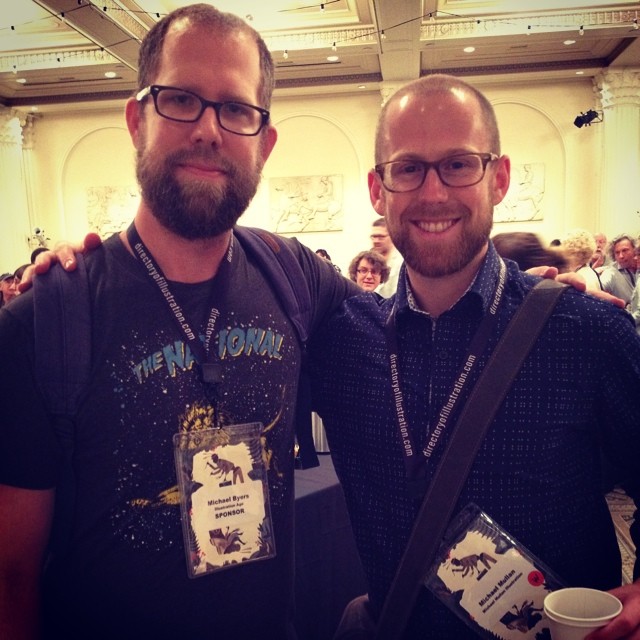 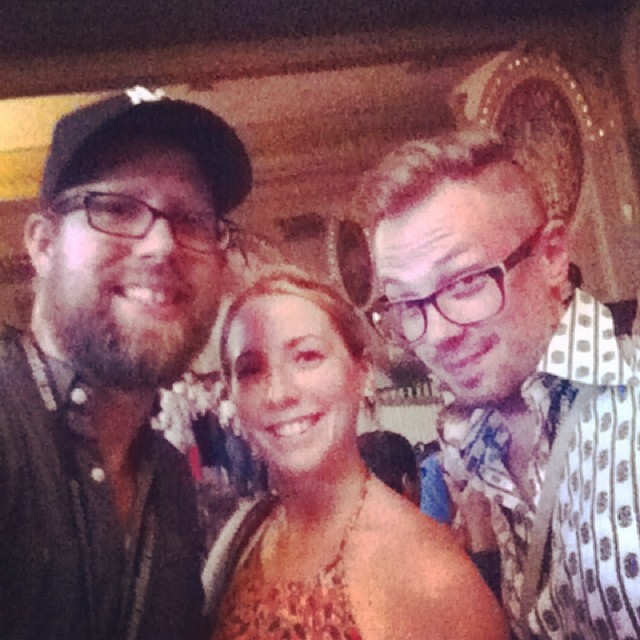 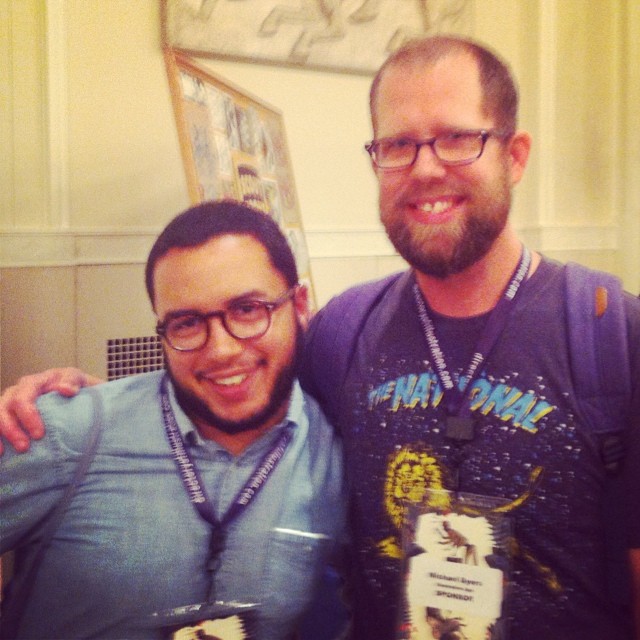 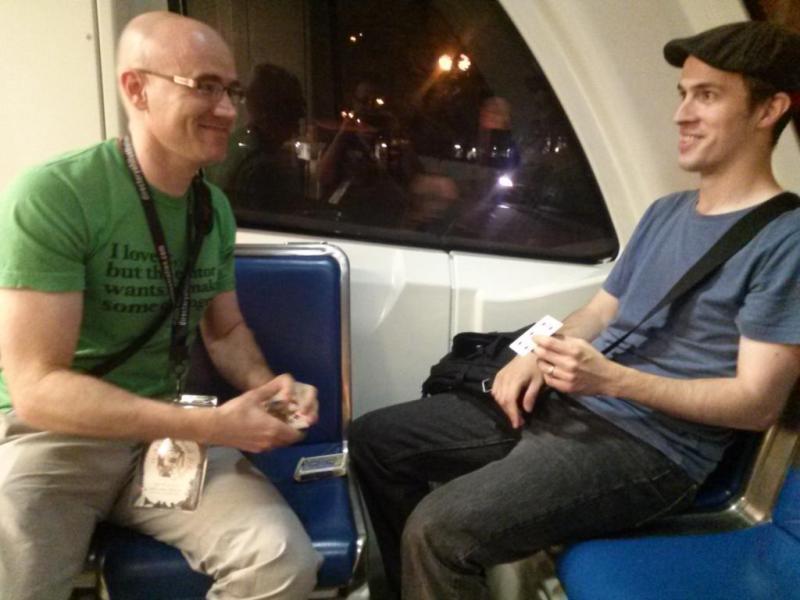 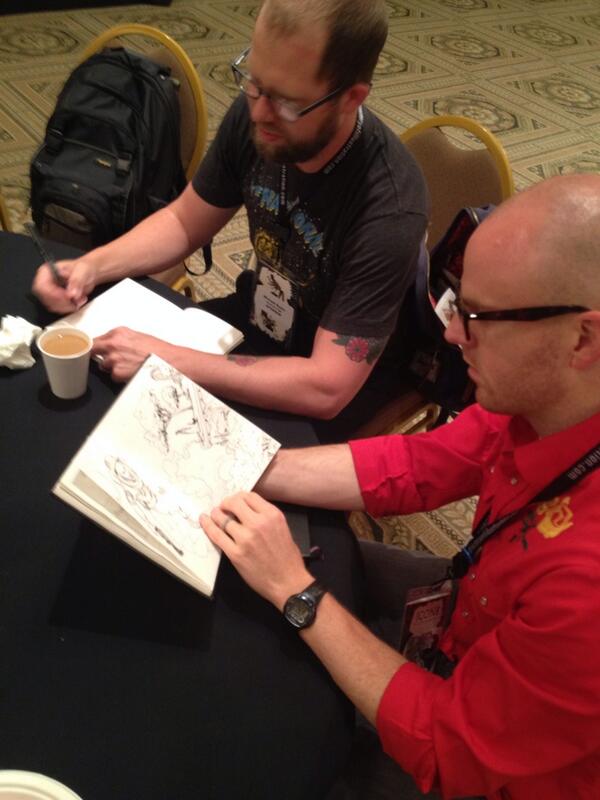 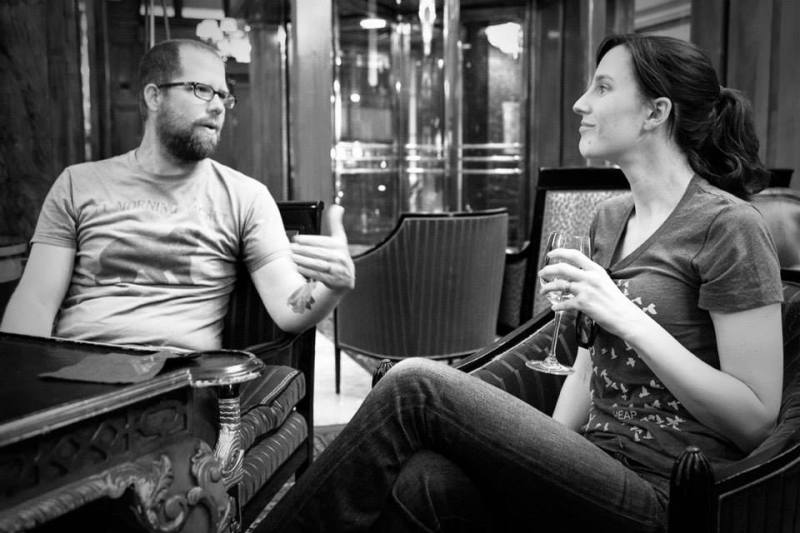 There are some regrets.

– Not taking part in the sketchbook exchange because I love doing that. Fortunately I was able to exchange sketchbooks with a talented illustrator Dave Habben. I now have a really cool drawing he did in my sketchbook
– Not hanging out more with some of the people I was hoping to meet up with.
– Not introducing myself to more people.
– I should have listened to the people who told us to not bother with VooDoo donuts. WAY over hyped.
– Registering earlier for workshops so I don’t miss out on any. There were quite a lot that I wanted to do but there were all booked up by the time I got to them.

I’m sure I could find more highlights but I want to you finish reading this post.

In conclusion go to ICON9. I’ll be there with my dancing shoes, sketchbook, and this time with some foot repair supplies. I had many blisters from walking so much. Not that I’m complaining.

I couldn’t finish this post without thanking all the people who put this conference together. The board members, the volunteers, the people who spoke, the sponsors, the people who attended, and all those did their part to make such a great experience for many others and me. Lastly, I need to thank Thomas James at Illustration Age for making it possible for me to attend in the first place. 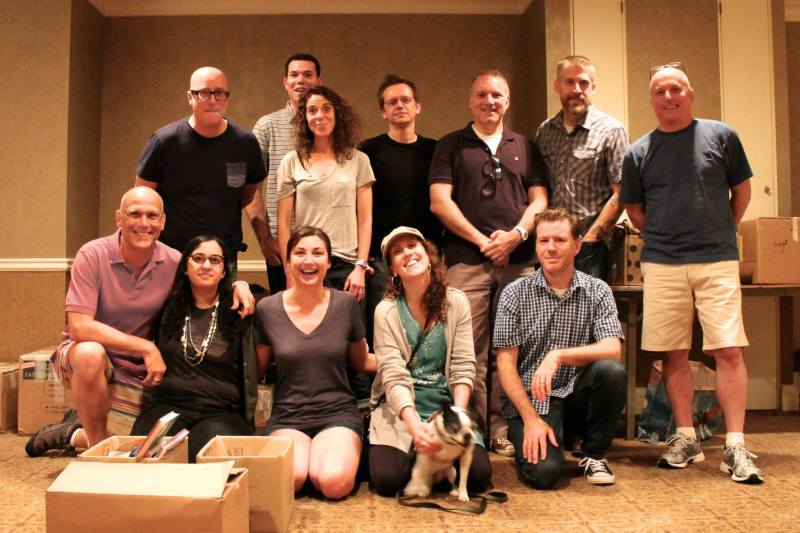 Photo Credit: Unknown. I got this from the Ellen Weinstein’s Facebook Page

ICON8 came and went. It flew by WAY too fast. Now I can begin the countdown to the next one. We don’t know where it will be held but regardless I’ll see you in two years ICON9.
See some of the rest of you at the next party. 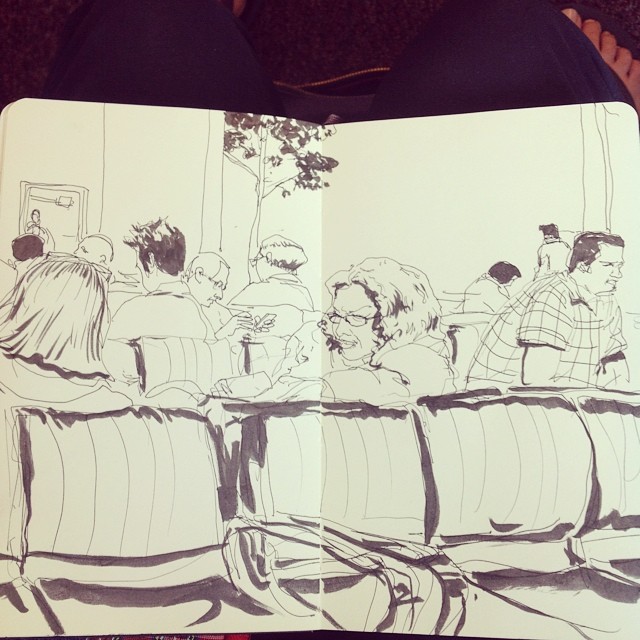 Here is a recent piece I did for Hawaii Magazine. This was about how popular and great eBikes are. They’re great for people who live and visit Hawaii. You can buy or rent them and take a scenic ride around the beautiful islands.
Enjoy. 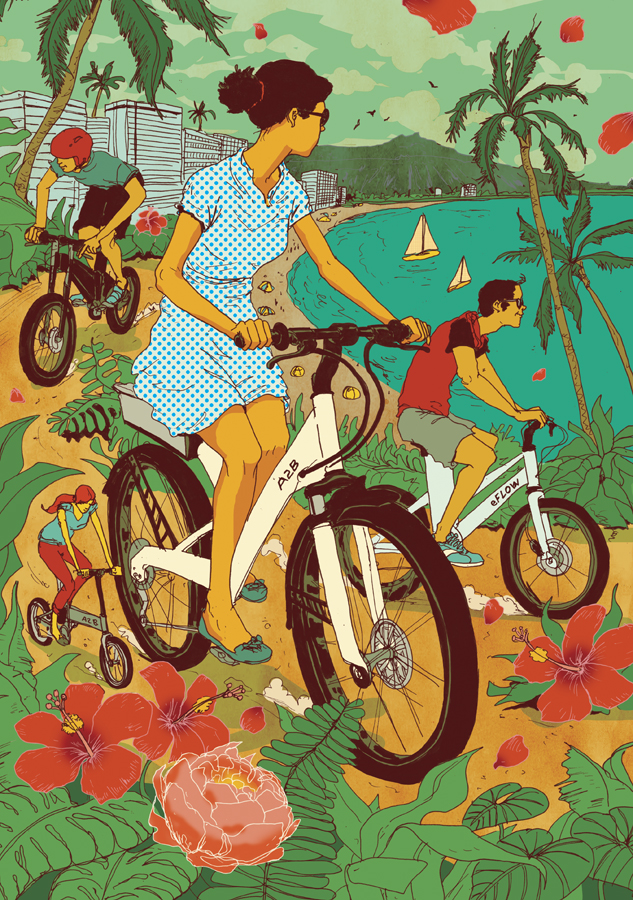 This was a the last piece I did with the wonderful Art Director Deborah Lawrence who is no longer with the Rotarian magazine. It was a sad day when she announced that she will no longer be working there. I really enjoyed working with her. This is the latest piece about a gentleman named Charles Heller and how he immigrated to the United States from Czechoslovakia in 1949 when he was 13. He talks about how that journey was and how much of a refuge and comfort the US was for him. 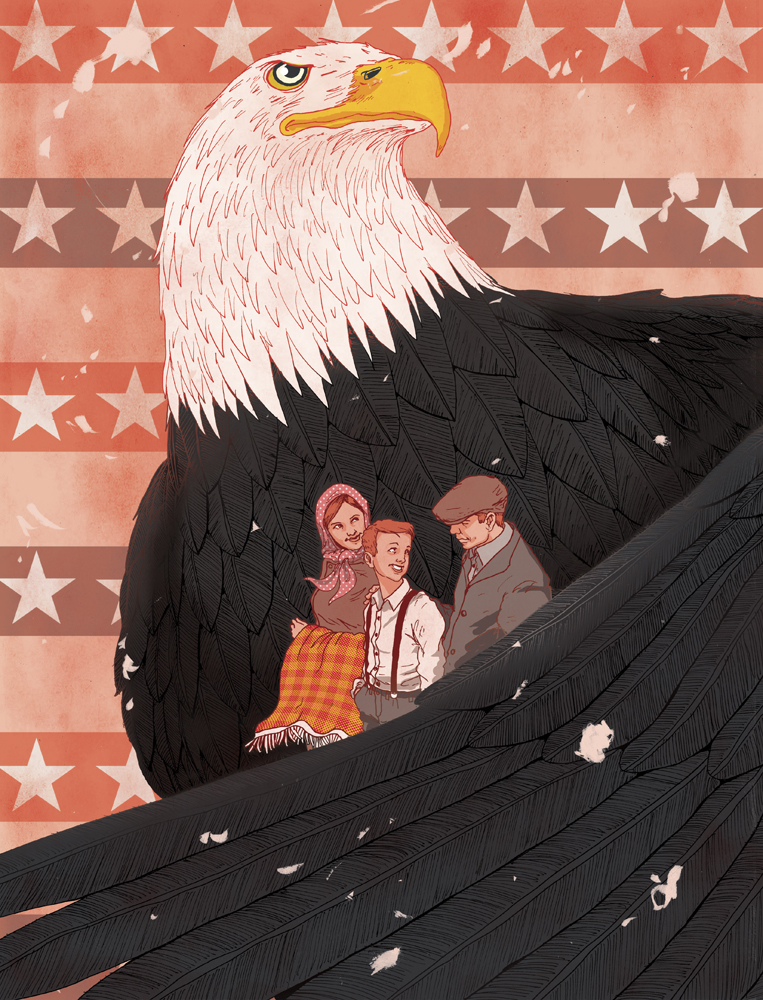